Resonant soft x-ray scattering (RSXS) is a recently developed powerful probe which can directly study novel spin, charge and orbital ordering phenomena in materials. In most solids, the atoms arrange themselves into periodic lattices. Conventional x-ray diffraction has been the standard method of determining the precise spacings and locations of the atoms for nearly a century. By determining at which particular angles the x-rays are scattered from a crystal yields information as to the positions atoms. However, in certain very novel materials, a very small fraction of the electrons (or the spin of the electrons, or the orbitals occupied by the electrons) form additional ordered structures, driven by the interaction between these electrons. It is believed that many of the highly exotic physical properties observed in materials such as the high-temperature cuprate superconductors or colossal magnetoresistive manganites may arise, at least in part, from the existence of these ordered structures.

Because these ordered charge / spin / orbital "superstructures" are comprised of only a very small fraction of the electrons, they are essentially impossible to detect with conventional x-ray technique. However, RSXS presents a highly sensitive probe of this phenomenon, with a sensitivity many orders of magnitude higher than conventional x-ray diffraction.

At special "resonant" values of the x-ray energy, the atom absorbs a photon, exciting an electron from a tightly bound core state to an unoccupied orbital. Because these resonant absorption lines depend strongly on the element as well as the particular orbital, performing diffraction experiments at these special x-ray energies provides a great deal of elemental and orbital specificity, allowing us to probe small fluctuations of the charge, spin, or orbital density in complex materials. 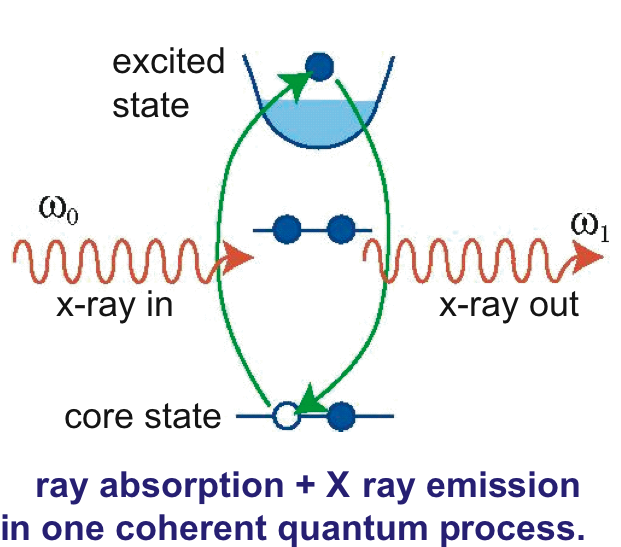